From Monday 6th July to Thursday 16th July, a group of six young people from Norfolk, along with two leaders, went as part of the Twinning Youth Exchanges to Rouen, France,

The Cultural Youth Exchange in Rouen was the fourth leg of a set of Exchanges based around Norwich’s twinnings, with previous exchanges in Norwich, Novi Sad, and Koblenz. This Exchange involved around 45 young people from France, Germany, Serbia, Bosnia and Herzegovinia and of course, Norwich, and the 11 days were centred around the topic of Tolerance and Integration in Sport. 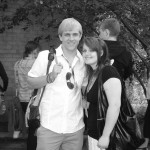 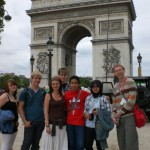 The Exchange included problem solving discussions in mixed-nationality groups, a visit from two young French sprinters who were able to achieve in their sport, despite handicaps. The visit also saw meetings with the Mayor and Lord Major of Rouen in their Town Hall, and a talk from the head of a French Community Radio Station, who talked to the group about young people in France, and some of the methods being used to try and get them off of the streets, and involved in more constructive practices.

During the course of the exchange, the group also engaged in some exciting activities, like treasure hunts around Rouen, visiting the sights and shops of Paris, and a fun-filled day at EuroDisney!